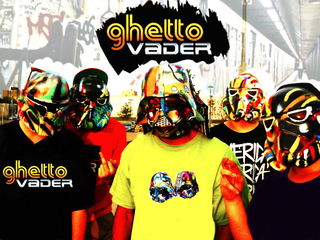 SEE MORE PHOTOS
KINGSBRIDGE HEIGHTS — If Darth Vader was spawned a long time ago in a galaxy far, far away, Ghetto Vader came into being five years ago in Southern California, under the influence of drugs.
It was then that the Bronx-born DJ, rapper and graffiti artist realized that, at age 35, he stood no closer to fame or fortune than he had as a teenager in the 1980s, when he first began to spray and scratch.
Out of ideas, he turned to hallucinogenic drugs. Suddenly, a vision appeared — Darth Vader’s iconic, bug-eyed helmet covered in bright, psychedelic street art.
Five years, two albums, shows in a half-dozen countries and 200 painted masks later, Ghetto Vader is a full-fledged Jedi Knight, given to the weird side of the Force, who has returned to The Bronx to make music and art for the open-minded.

PLAY VIDEO
(YouTube/Ghetto Vader)
“People aren’t going to be bopping to it in the clubs and remembering the lyrics,” Vader, 40, said outside his mother’s condo, where he has been living since June. “But people dressed up in costumes — they’ll like it.”
Vader, whose persona involves concealing his legal name and his face, grew up in a high-rise near the prestigious Bronx High School of Science. That he wasn’t admitted into Bronx Science proved to be a blessing — Vader attended nearby John F. Kennedy High School, where 80s hip-hop culture was flourishing.
Before long, Vader was trekking downtown to all-ages rap shows and spraying his tag — SPX, for “special perceptions xceptions” — across the city. When he was 16, he “interned” for a renowned graffiti artist who airbrushed clothes in the back of a Westchester Square shop that sold cutting-edge rap records.
“That stuff like touched my heart,” Vader said about the heyday of Bronx hip-hop. “It stained my brain.”
In his 20s, Vader moved to California, where he scoped out the West Coast rap scene while he worked in clothing design and, later, produced skateboard videos. He also continued to experiment with music, sampling beats with an early four-track cassette mixer.
But by his 30s, with a wife and three children, he began to feel like he had squandered his talents as an artist. So he ingested some peyote and, in a cloud of aerosol, created Ghetto Vader — a one-man production team, performance artist and brand.
Read more: http://www.dnainfo.com/new-york/20120725/kingsbridge-heights/ghetto-vader-is-force-of-hip-hop-jedi-weirdness#ixzz21latKEUu
Publicado por Lord Serer en 14:33